Nothing gets more mass media coverage than our national election.   And, when most people think of election coverage they think of CNN’s John King showing real time results using the “Magic Wall “. CNN’s Magic Wall is considered one of the most iconic data visualizations of national and state wide election results combined with exit poll data to explain voting patterns and trends.  When combined with demographic data including age, race, religion, employment and population stats with drill down to the county voter precinct level–you have data visualization with real-time analysis compelling enough to captive millions on live Television.

John King uses the Magic Wall’s to rapidly displays data, drilling down on a map of the US or a State with a large touch display to show the detailed voter turnout results on live television.  Using data visualization, the layers of election results are pulled apart and examined in detail to provide deep insights; quickly and accurately. 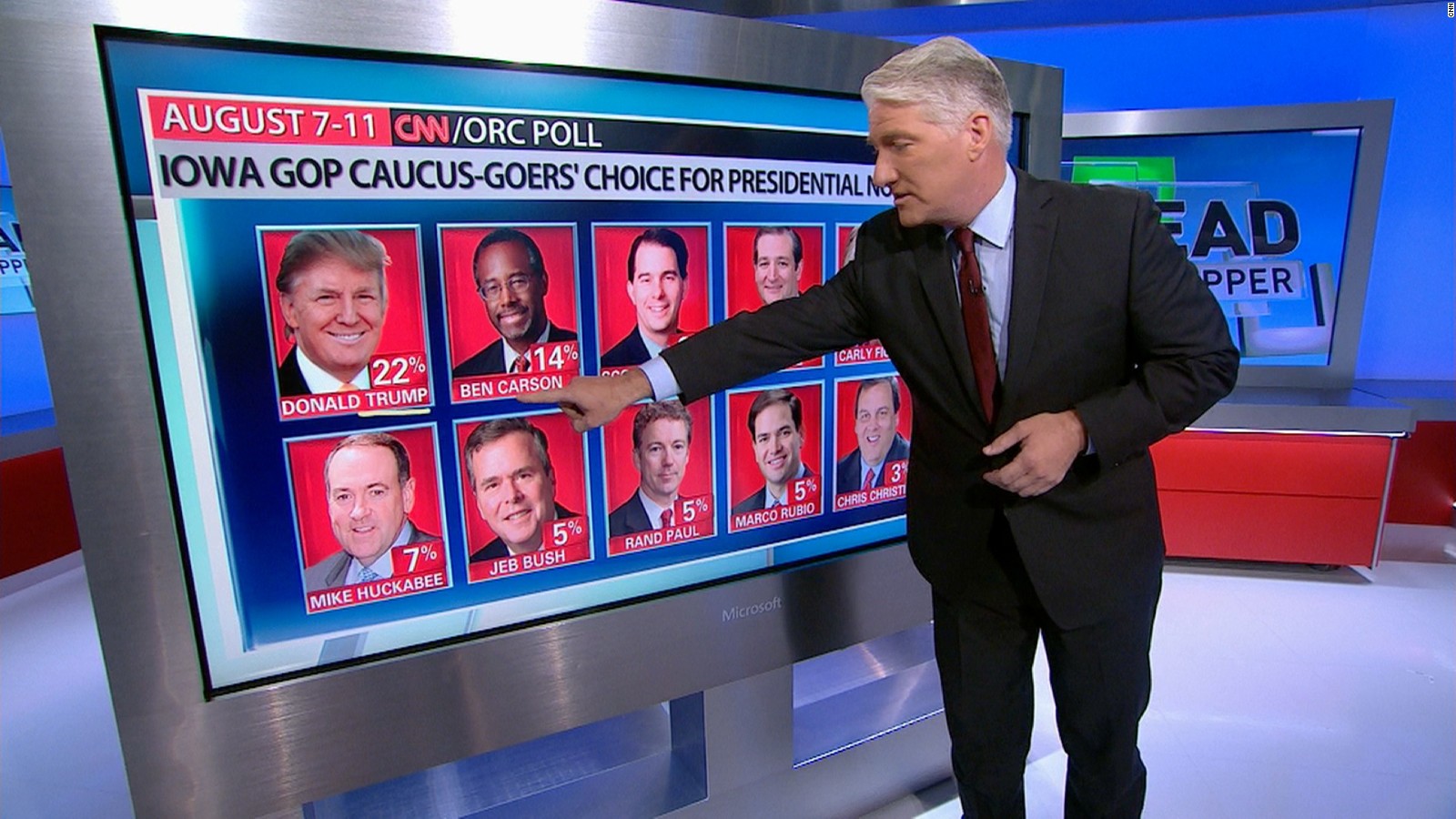 Because of the ease of use and rich visualization, the Magic Wall provides a strategic competitive advantage to CNN over the numerous other media outlets broadcasting the same coverage.

So what is so magic about the wall?   Why is it so compelling and engaging?  Wouldn’t it be satisfying if your business analytics visualization solutions had its own social media following?

A great User Experience is the ability to quickly communication detailed information in seconds with a simple to navigate screen that allows you to tell a compelling story.

Data visualization on digital devices is an emerging art form right alongside of data science. Great data visualization, is the critical success factor and getting even more traction within applications as Internet of Things (IoT), Business Intelligence, data analytics, and data analysis from social media platforms grow in abundance and importance.

How can you get your message across in less than 2 minutes on a range of devices with a super simple yet compelling user experience?

It is widely known that Perceptive Pixel’s technology (a division of Microsoft) is used as the CNN Magic Wall display. What is not widely known is that //InterKnowlogy  a leading software shop for digital devices in Carlsbad, California, are the creators of the software and the designer of the now famous touch user experience/interface.

Rodney Guzman, a co-founder of InterKnowlogy explains, “…that even for an application with a single user (John King), we will have a User Experience (UX) artist create screen mock ups in a rapid ideation cycle with John to shape and finalize the Magic Wall screens and data visualization patterns”. 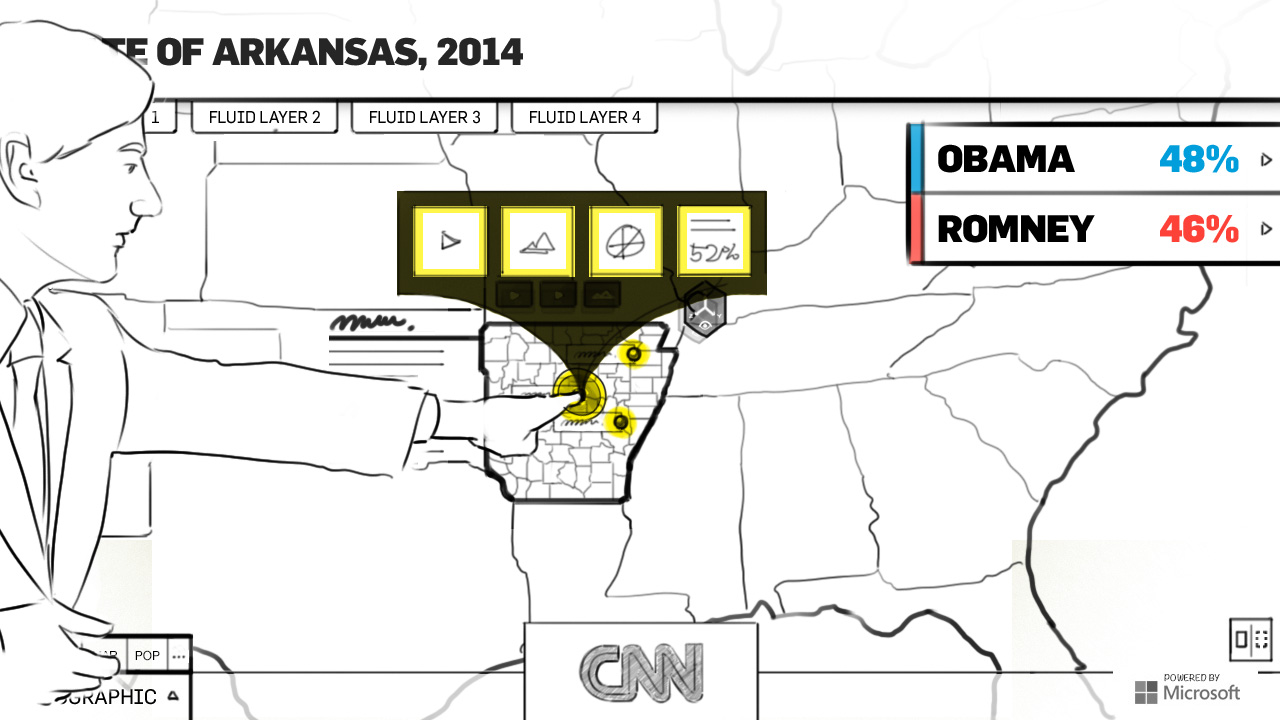 The now famous demographic overlays and ability to answer the What if’s on live television, “comes from a deep understanding of the user’s interaction expectations for who, when and where the digital devices is being used”, Rodney adds.

According to Rodney, “On election night our solution has to scale with massive throughput without any glitches to provide the CNN audience John King’s trademark presentation using our analytics software to power the magic wall’s custom visualization”.

John King’s fluid movements to drill down on data on live television comes from being very involved in the user experience design.  John worked closely with InterKnowlogy (IK) to layout the touch screen controls, interactions and drill paths.  John also determines the data to be collected and loaded behind the scenes by CNN data analysts that provide frequent data loads throughout the election night coverage.

To make importing vast amounts of data into the SQL Server database quick and easy, IK built a custom excel spreadsheet for CNN data analysts to use throughout the broadcast.  In turn the SQL Server DBMS powers all of the data views and analytics of the Magic Wall.  The custom excel spreadsheet allows the data analyst to make numerous data imports as election data flows into the CNN headquarters in Atlanta.  When an election data update has been loaded, John King is alerted to its availability for use on-the-air.  John then combines his on-air talent for explaining the election results using the data visualization of the magic wall to show the data in a way that makes it interesting and compelling.

When asked further about the software development work behind the Magic Wall, Rodney points out, “while a lot of work goes into data collection, transformation and running a highly tuned database in to support the massive scale-out processing, queries and real time analytics, the secret to a successful application is translating the ways in which users interact with the data on the device into a simple, intuitive and fun experience. And, that can only come about when there is friction-less, rapid and continuous ideation between the user and the User Experience artist”. 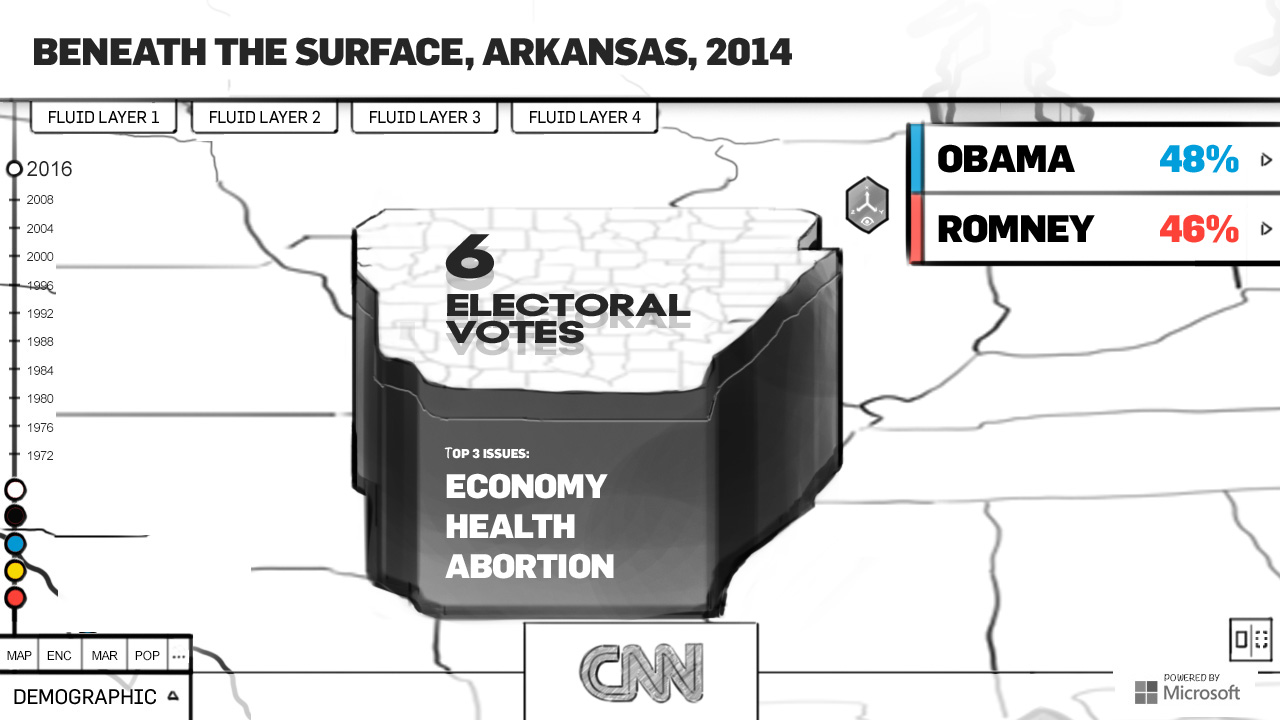 InterKnowlogy (IK) has great developers and built many deeply technical solutions, but they don’t let them near user experience (UX) design. IK has spent years growing their own internal digital device artists—that know how to iterate quickly with drawings to ignite the imagination of users and draw out the essence of the end result with how, when and where the solution will be used. 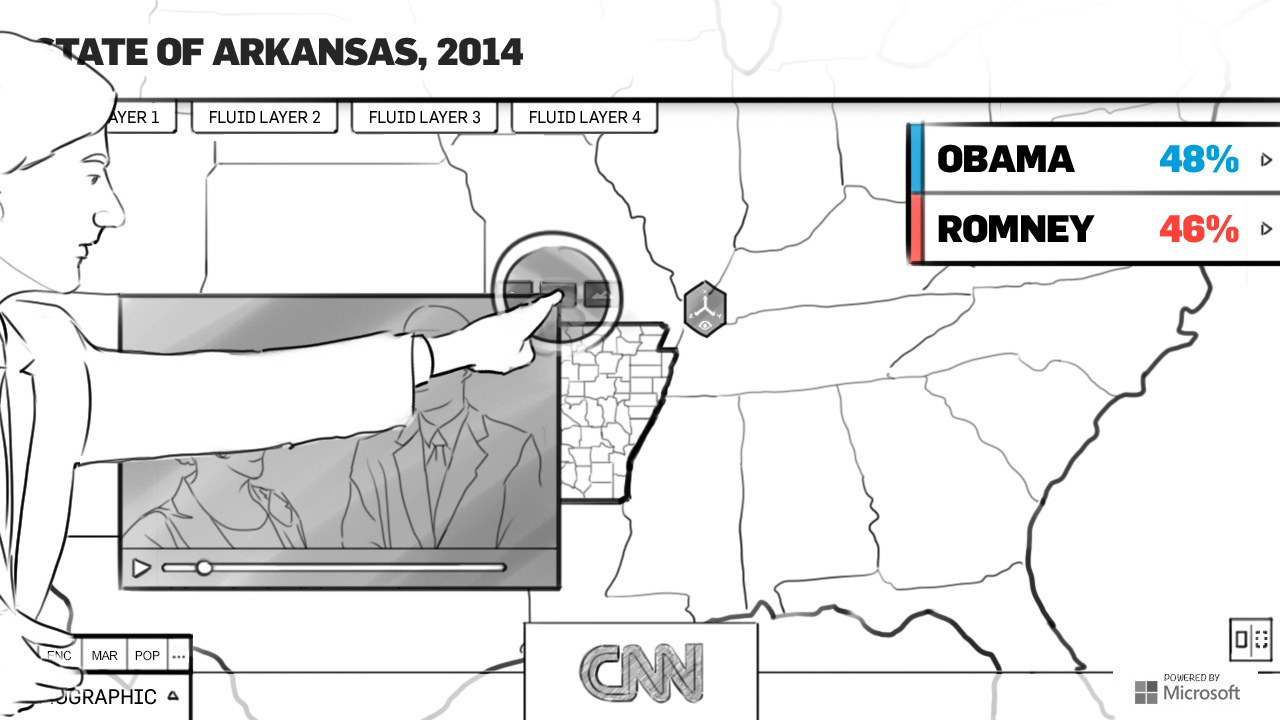 IK has created the UX Artist role so the more creative aspects of their talents enable a quick turn around with screen examples while the last conversation is still fresh in the users mind.

“A dedicated UX Artist professional is how we win over users and great the best design for data visualization.   We have optimized our ideation process with a variety of tools from pencil sketches to detailed visual comps in Photoshop,” IK’s Rodney Guzman, a co-founder of InterKnowlogy explains.

In 2012, the Republican primaries were too close to call and 8 precincts vote counts could not be certified. According to the Des Moines Register article at the time, “There are too many holes in the certified totals from the Iowa caucuses to know for certain who won, Mitt Romney was reported to have won on election night, but Rick Santorum wound up with a 34-vote advantage”.

Results from 8 precincts were missing. GOP officials discovered inaccuracies in 131 precincts.  When voters cannot vote with confidence the very fabric of the republic is undermined.

Microsoft felt the issues were significant enough and a big black eye for the election system in Iowa to step in with an offer to help.   The offer to provide technology support was accepted and Microsoft turned to InterKnowlogy (IK) to create the software solution. 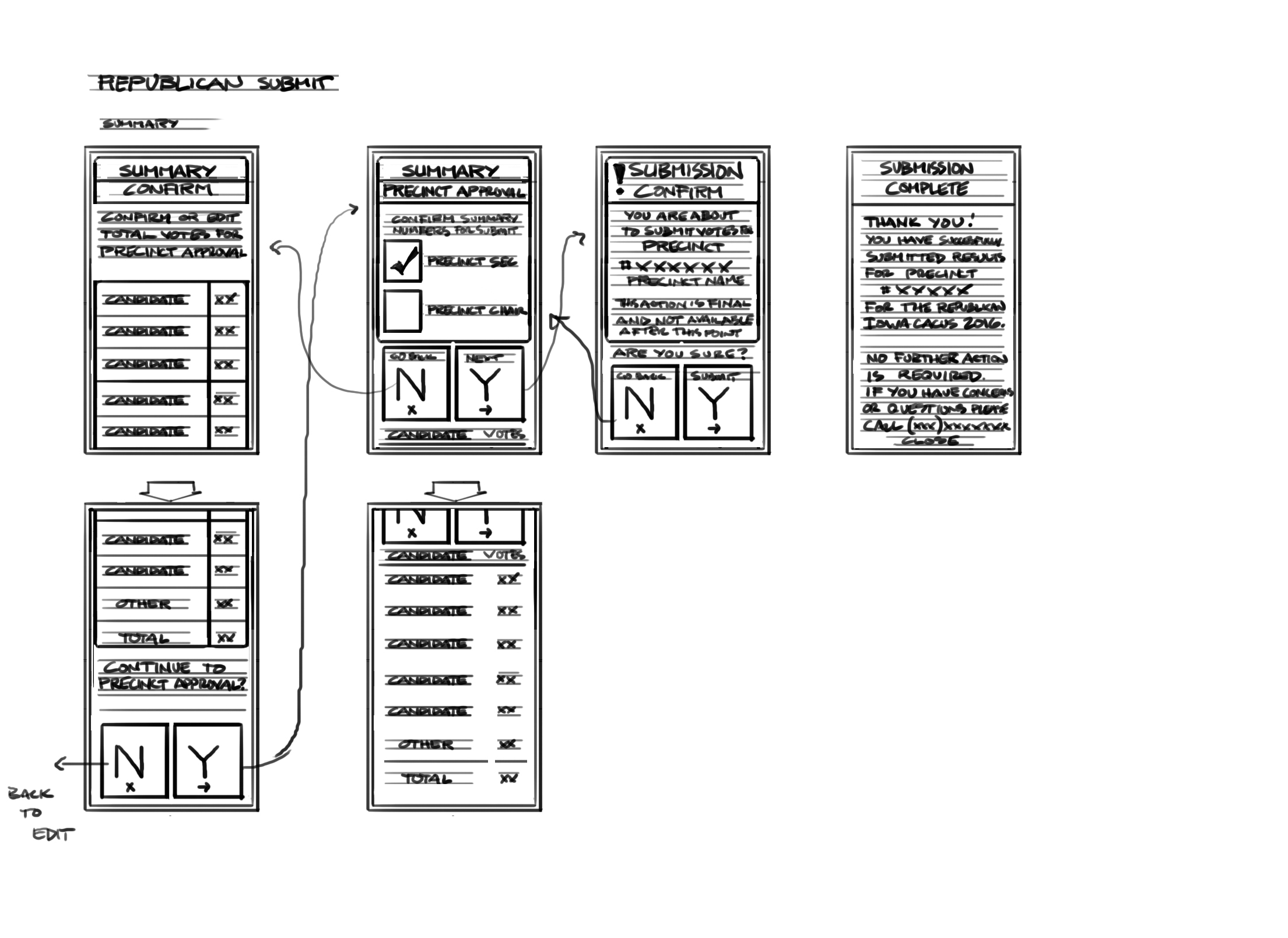 “Deployment of this app was like our super bowl”, say Rodney, “it all has to work perfectly on election night.  Months of work went into detailed discovery of exactly how the application needs to work with a range of user skills and devices used by the precinct captain at each caucus location.” 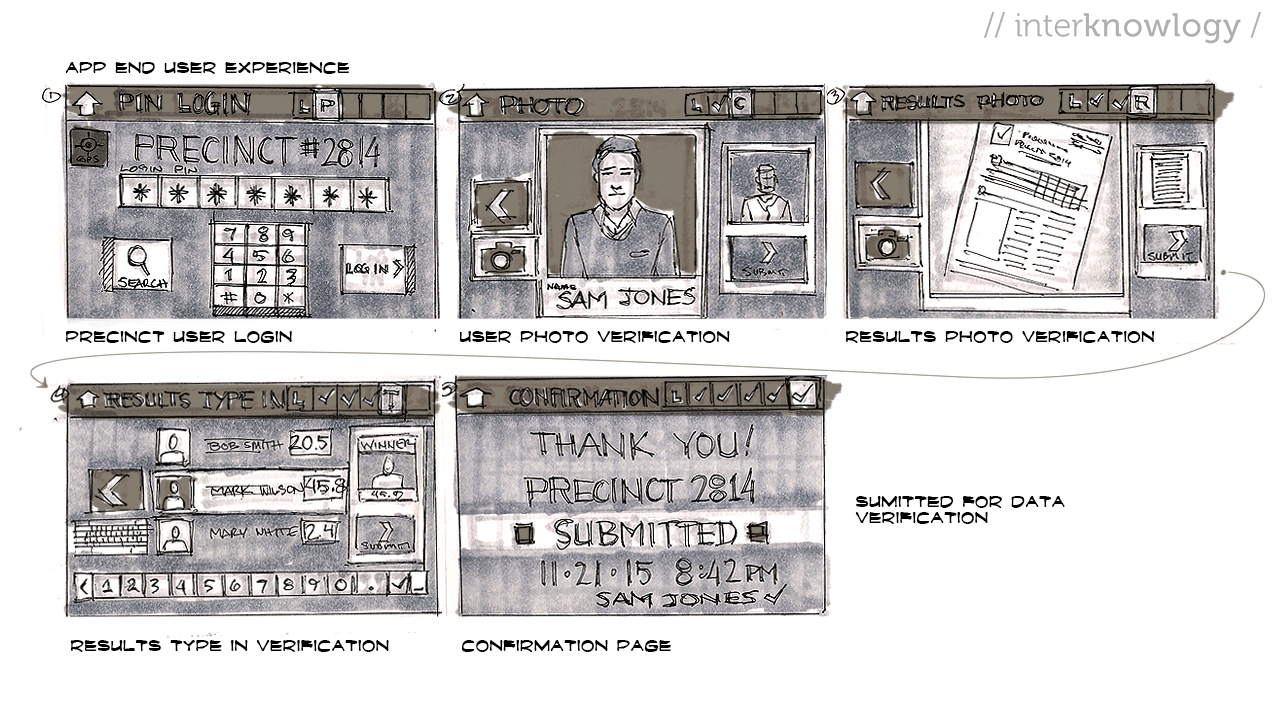 Building a secure application was paramount, because anyone could download the app to their smart phone.   The precinct captain had to be authorized to use the app for reporting their caucus results.  IK decided on a two factor authorization scheme using a unique PIN code.  The entire app was built using the Xamarin platform so it would work on iOS, Android and tablet devices. Each precinct captain supplied their SMS number to election officials in order to receive their unique activation code or PIN for submitting caucus results at their location.  IK also applied PIN expiration logic for additional security.

In 2016, there was a huge caucus turn-out, and national attention.  Within three hours of polls closing 90% of the votes were accurately recorded in a secure and trusted fashion. IK built this solution for caucus precinct captains to report their local results immediately upon the final count.  The mobile app is a first of its kind caucus election reporting.   If the precinct captain did not have a smart phone they call in the results to an IVR application that accepted and recorded the tallies.

IK employed their UX artists to iterate with Iowa election and party officials on the ideal way to use smart phones/tablets to report results quickly, accurately and easily.  IK built an app for each party, (both Republican and Democratic) to receive real time results in their war rooms.   Several validation points were built into the app to protect the integrity of the reporting process; such as using precinct voter population for comparison to reported results, as an example.  Both parties were very pleased with how smooth the caucus results flowed into their war rooms.

IK also built the public web site for results to be published.  With a peak user load on election night, hundreds of servers were provisioned in Azure, (Microsoft’s Cloud) ahead of time to handle the demand. The results of the solutions deployed restored confidence in the caucus system.

This is a great success story of how an old paper based system was transformed into a digital process using mobile devices and a Azure cloud based back-end system.  Get a behind the scenes story here TechNet Radio

Now, IK is fielding calls from other states, even other nations asking about a solution for their elections. 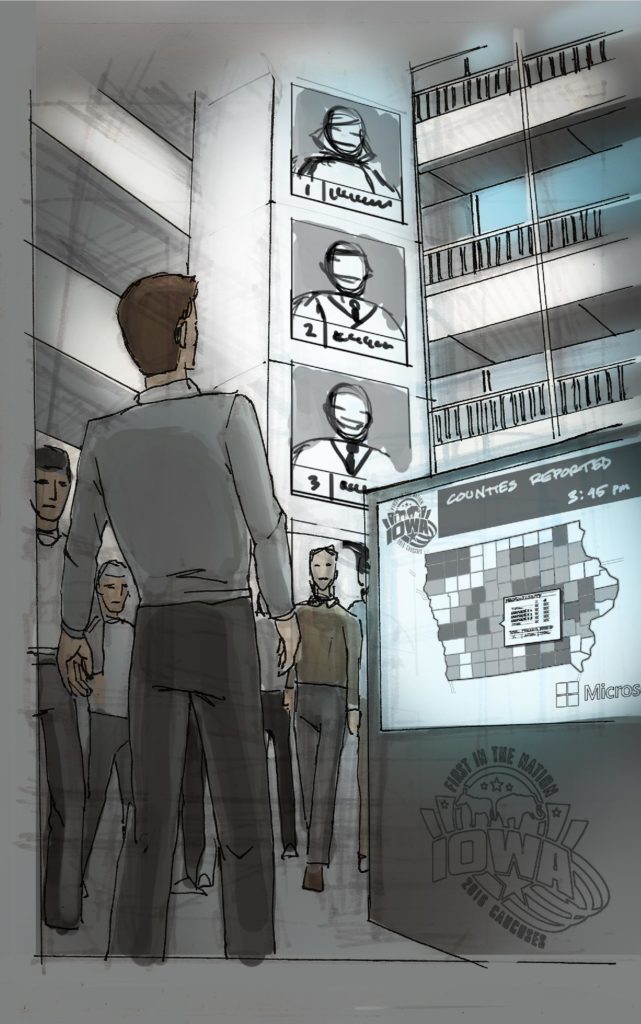 Envisioning how technology can advance the way election results are distributed

IK has gained the attention of the Democratic National Committee

The Democratic National Convention will be using a new IK solution to replace to their paper balloting process to create a real-time vote collection into a database that will feature data visualizations.

Rather than paper ballots, delegates will vote on tablets. The results will be streamed in real time to a jumbo-tron screen in the arena for all to watch.  IK has created many visualization features—one certain to gain media attention will be a U.S. map that show the voting counts state by state on the convention floor. 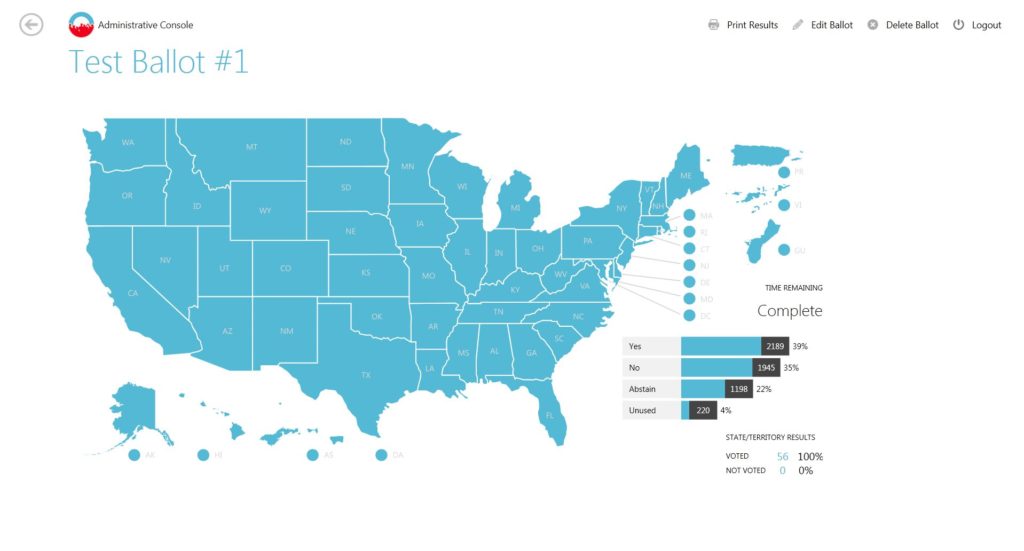 Data Analytics has always been the currency of information.  Now, technology is unlocking it faster and easier than ever before.