Software Architecture in the Digital Era

For as long as people have been writing software routines, there has been a desire to manage the resulting product by keeping it simple and separating functions into sub routines/components. Over time several software abstraction models have been used and discarded.  What has survived, however, are the battle tested approaches to form classes and interfaces with shared libraries, technology layers using tiers to partition back-end data storage from middle tier business logic and a presentation front-end.

What has not changed over the years are business needs:

Despite the fact that the state-of-the-art for software develop patterns and practices continue to evolve over time; these business drivers remain front and center in the creation of the modern application architecture.

If you ask any software developer that supports a legacy application you will hear about the painful challenges associated with updating a “monolithic” application.

The dangers and pain from Point-to-Point interface approach

One of the biggest problems faced supporting legacy software are Point-to-Point interfaces. Using Point-to-Point interfaces were done in the past—because they are quick and easy to establish to get version 1 of the product shipping.  Often those continue to grow like weeds and before you know it–their are numerous internal interfaces; used as a method to send messages and data between applications and technology layers.

Maintenance and changes to applications using point-to-point interfaces are people intensive, tribal knowledge intensive and frustrating when large updates are needed or integration to other parts of the business needs to be introduced quickly.   And, today, quick updates are critical to business growth.

Eventually, the organization will pay the toll for the code debt.  I have seen organizations bring people back from retirement to help because no one else knows what was done–and they are too afraid to make a change

The complexity of managing, updating and refactoring an older code base is often underestimated by Executives.  In turn, Developers are forced to find creative ways to split their code base in order to meet new demands for features.  This only adds more complexity and costs.

The purpose of this post is to introduce or reinforce the core concepts and benefits to using a Microservices approach to your service oriented architecture; as a better way to architect and refactor applications.

The big idea behind “Microservices” is a set of organizing principles for designing, composing and factoring software for building responsive business services and functions that can scale with modern technology to serve customers worldwide.

A common approach many organizations take is to firmly insert middleware to manage their services in a publish-subscribe (pub/sub) model; which works great as long as the middleware is not used for processing business rules, business logic or complex orchestrations; since that defeats the purpose of agile (self-contained) service architecture in the first place. 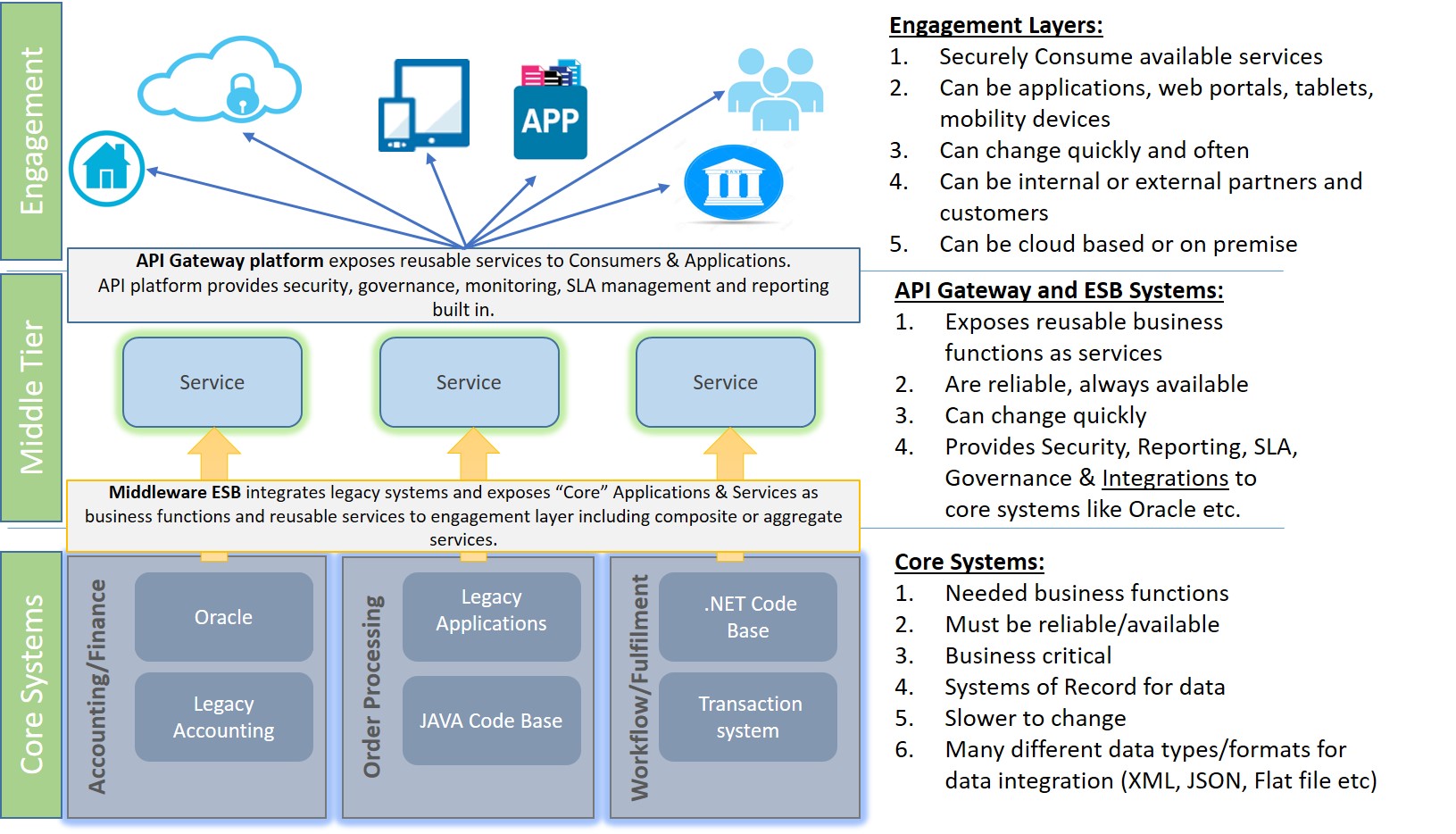 The graphic (above) illustrates how some organizations position their services to leverage core business functions through middleware technology layers. The middleware layer is represented as an Enterprise Service Bus (ESB) and completed by using an API management system.

The main goal of Middleware is to lossely couple autonomous services though open standards to enable enterprise class interfaces between applications and data sources.

Being able to make a change to a back-end legacy application or data sources without impacting services means your organization can introduce change rapidly and avoid the time and cost of changing and testing interfaces.

Organizations have been using SOA concepts for over a decade.   Benefits include:

There is less of an agreed upon definition for Microservices as there is a convergence of the following characteristics:

What Microservices is not focused on programming language, frameworks and especially not Middleware.

If you want to apply one simple rule to determine if what you are doing is indeed a Microservice model, it would be, that your service can be updated and deployed completely independent of making any change to any other service or a service bus (EBS)

Well-crafted Microservices use well-defined interfaces and protocols and encapsulate their own business rules to be middleware independent.

Here is a simple example to illustrate the concept of single responsibility per service:

If your bank were building with SOA, their services might be:

If your Bank were building with microservices, their APIs might be:

SOA and Microservices are very similar tactics and the difference between the two may come down to implementation approaches. Developing an application by exposing core application code or business functions as a web service with the same code model as your application including schema, contract, classes, modules and components is not adhering to the tenets of microservices; an application built around very small single service that is self-contained, independently deployable in a fully automated fashion, and generally exposed over a RESTful API.

Too many times I have seen organizations claim they are using SOA–only to find they have jam packed an XML payload with all the data that all interfaces need from the source application into a single web service.  Then when the web service is modified the consumers have problems and need to update their parsing logic.  I have observed more than one incident response team working late into the night looking for the reason an application is having an issue–only to find that a change made to the web service broke their interface.

In the digital era it is all about immediate responses in software to swiftly changing customer needs that is self-healing and automated.  True autonomous microservices may be written in different programming languages and use different storage technologies.  That is what a microservice approach to implementation gives you over SOA.

Large investments in SOA are not lost.  De-compose, then re-compose them into individual services with a modest level of re-factoring work.

A key tenant of microservices is that the service contains all of the business logic it needs to perform its function.   The function of middleware in microservices architecture is to provide basic support for discovery, transport, and delivery of the service in a pub/sub model.

Think of Middleware as less an Enterprise Service Bus (ESB) and more of an API Gateway. Discovery, transport and delivery of a service, specifically any consumable interface that is web based (e.g. http based) would benefit from leveraging an API management system.  Arguably, this can be viewed as middleware, but more appropriately viewed as a Service Gateway, as part of an orverall architecture, where service discovery, management (versions), contracts (subscribe), SLA, governance (publish) and reporting can be done without building that into the service itself, these are not capabilities found in middleware messaging systems (e.g. ESB).   Generally these would be implemented in the service provider itself or provided by an API management layer or Gateway.

Inspired by Amazon and Netflix

Today, many point to Amazon as an organization that was able to conqueror services architecture and then turn around and sell it to the rest us of—but the world famous Amazon.com was not always as well crafted.   Go back to the very beginning and Amazon.com code stack was a nicely tiered very tightly coupled components to form a monolith.

“If you go back to 2001”, Amazon, Sr. manager for product management Rob Brigham said at a 2015 conference, “The Amazon.com retail website was a large architectural monolith”.  Amazon decided to decompose their monolithic architecture and pull apart functions into services.  According to Brigham,  “We went through the code and pulled out functional units that served a single purpose and we wrapped those with a web service interface.”

Like Amazon, at the beginning, Netflix had to transition from a traditional development monolithic DVD-rental application to a microservice architecture model using small teams that own a process from end-to-end, yet able to work together, to stream digital content to millions of Netflix customers.

Azure Service Fabric is a platform you can leverage for building distributed systems at scale with low-latency in the cloud; and attaining the big benefits of running microservices at scale.  It is a platform of system services for deployments, detecting and restarting failed services, state management and health monitoring.  It also provides programming API’s for straightforward integration.

Sam Newman and Martin Fowler are both very well respected experts and authorities in the area of Microservices.  Their blogs, books and YouTube presentations are well worth your time.

Sam’s book Building Microservices is a must read for those that are going down that path.

An overview of Sam Newman’s guiding principles for Microservices is below: 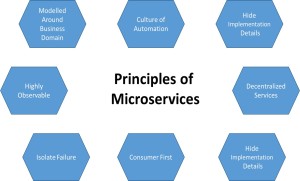 The battle cry for many large IT organizations for the next five years will be:

“Break your legacy, monolithic systems, even your web services into independently deployable microservices.”

When Microservices are combined with a DevOps approach using containers for deployment infrastructure and you will have a robust software factory with the ability of meeting business objectives rapidly to support a digital business strategy and disrupt your competitors.